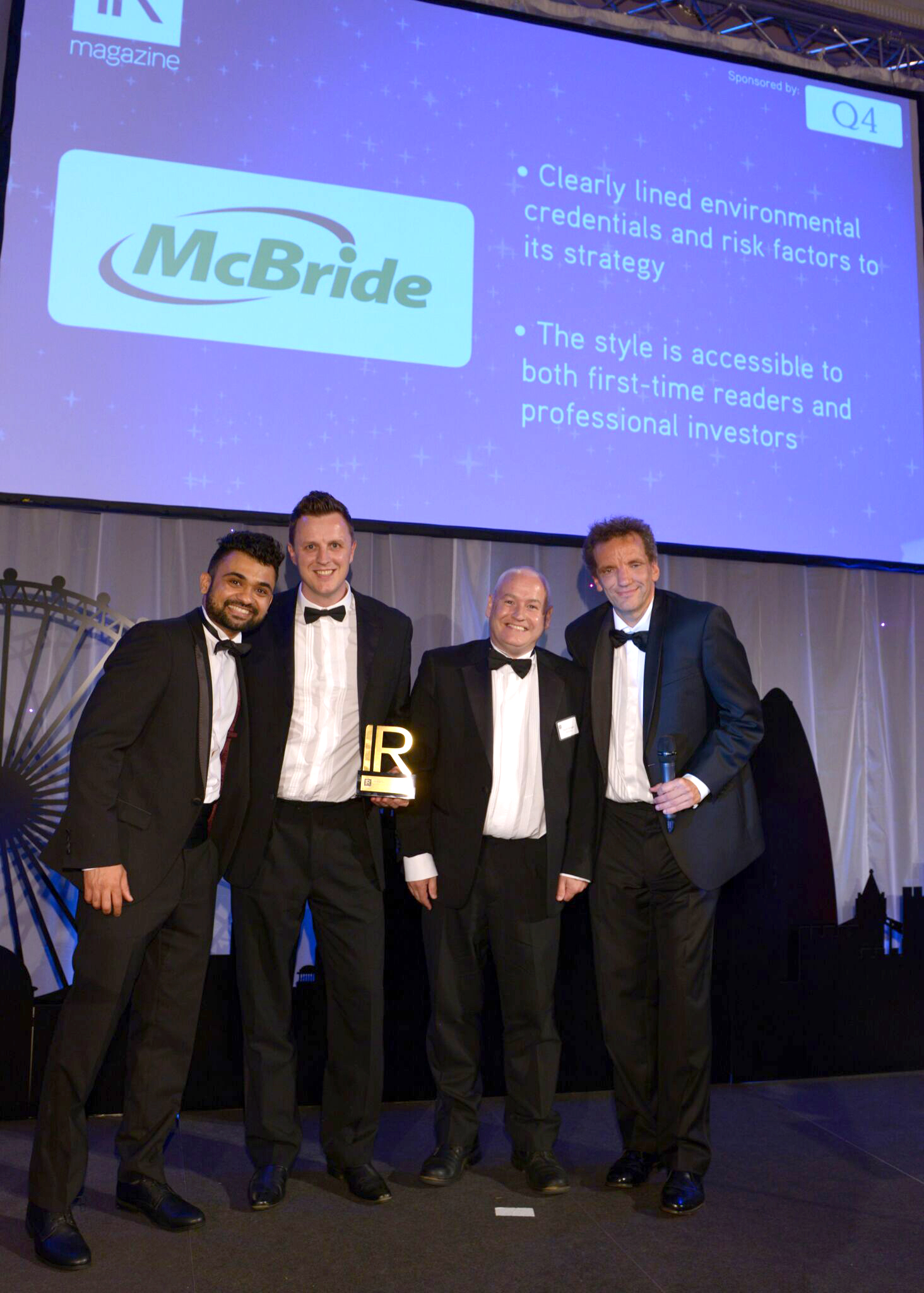 Lyonsbennett client, Manchester-based manufacturing business McBride plc, was in the spotlight once again last night, winning Best Annual Report at the prestigious IR Magazine Awards 2017. The IR Magazine Awards is an international event that celebrates the very best the Investor Relations community has to offer across the whole of Europe.

Produced and designed by lyonsbennett, McBride’s 2016 Annual Report was commended by the judges for its simplicity and clarity – and the win reaffirms McBride’s status as a leader in best practice in the small/medium cap category.

Held at London’s Park Lane Hotel, the night was sponsored by Q4 and hosted by the ubiquitous German comedian Henning Wehn who served up plenty of the same self-deprecating humour often seen on Have I Got News For You and QI.

Gary Eden, Head of Group Reporting and Analysis at McBride, and David Rattigan, Group Financial Controller accepted the award on behalf of the team.

McBride plc commented: “We are extremely pleased and honoured to have won this IR Magazine Award. We all know how much time and effort is dedicated by all of the team to delivering the end result. Our thanks go to the IR Magazine for recognising us with this prestigious accolade.”

David Rattigan added: “Thank you all at lyonsbennett. Your support and flexibility is genuinely a game changer in terms of our performance. We value your contribution tremendously. I know this has been recognised by the team but awards like last night and last year make the point. You doing what you do so well allows the team here space to show their talents. Thank you.”

Darren Bennett, Creative Director at lyonsbennett remarked, “We’re delighted with this win, and we’re already working hard on the next Annual Report for McBride – ensuring we continue to evolve the project both in terms of creativity and best practice. Well done team!”

The IR Magazine Award builds on last year’s victory at the IR Society Best Practice Awards 2016, where the McBride’s 2015 Annual Report was awarded for its newly unveiled strategy, clarity of communication and disclosure.

Find out more about McBride Plc